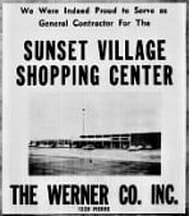 Beginnings
The parish of St. James began in 1955 with the shared vision of three laymen from St. Paul’s Episcopal Church to establish an Episcopal mission in southwest Shreveport. With the help of both St. Paul’s and St. Matthias they began to gather with about 8 families in a vacant storefront in the Sunset Acres neighborhood for services of Morning Prayer led by Lay Readers from St. Paul’s. The name of this new mission church was chosen at the second parish meeting. St. James the Greater, the brother of St John and son of Zebedee was chosen because of his commitment to Jesus and the special place he held along with St. Peter and St. John among the 12 apostles.

After a few months being housed in the temporary sites of Sunset Village Shopping Center and then at the Louisiana State Exhibit Building, the mission of St. James was able to acquire property on Marquette Street and move an old barracks building from Barksdale Airforce Base to the new site to serve as the Church building. During this time the Reverend Meade Brown, Rector of St. Paul’s, served as Priest-in-Charge and provided Communion once a month. Then in 1957, the Reverend Alfred P. Chambliss Jr came to serve as Vicar until 1962. During these early years the parish grew to over 50 members, held two Sunday School classes, and formed a Women’s Auxiliary.

A New Location
In 1967, under the leadership of the Reverend Wallace H. Garrett, a new location was chosen for St. James to have a more prominent place in southwest Shreveport. A 7 acre site was chosen on Flournoy-Lucas Road (now Bert Kouns) and a multi-purpose building was constructed to serve as a worship space and classroom for Sunday school. During this time Father Garrett also served as chaplain to Centenary College and to the “Skyscraper Chapel” in the Beck Building downtown. The Women of St. James also began a new fundraising project, providing all of the food for the annual Shreveport Kennel Club Dog Show.

Tragically, Father Garrett died in 1971 and so the Assistant Rector of St. Paul’s, the Reverend Keith Hall, was called to serve as Vicar. A role he filled through 1976 when the mission of St. James was recognized by the diocese as a self-sustaining parish. Fr Hall was then named the first Rector, a role he filled until 1980. By 1972 St. James had grown to 230 members with a Sunday school serving more than 150 people. A new building was needed to serve as a classroom and community space for the neighborhood and so a lodge was constructed (now known as the Garrett-Hall Building). This lodge was used by multiple scout troops weekly, evening small group meetings, dance groups, and for church school classes.

From 1976 to 1980, various lay groups were active in putting together social events for fundraising and fellowship. The Women of St. James held annual bazaars where gumbo was served and various handmade items and baked goods were sold along with a yearly Christmas party. The Men of St. James likewise held a pig roast beginning in 1978. The Youth Group, for their part, sponsored the yearly Shrove Tuesday Pancake Supper as well as Halloween parties, kite flying contests, and Easter egg hunts.

In 1979, St. James sponsored the Hong Lay family, refugees from Cambodia who came to Shreveport where they lived and worked for several years before moving to Dallas for work. The entire family was baptized and confirmed at St. James during their time in Shreveport.
A New ChurchFr. Hall left for Indianapolis in 1980 and St. James’ next rector was the Reverend Charles Krutz who was called in 1981. In 1982 St. James celebrated the Feast Day of St. James, the parish’s patronal saint for the first time. There were now 94 families at St. James. Many of the activities that began under Fr Hall continued with the addition of a folk mass on St. James Day each year.

In 1984 the parish was ready to build a new church, turning the current multi-use building into a dedicated parish hall. The new church building was designed in a traditional fashion with the altar area taking influence from the ancient basilica style of architecture. The red brick church building was placed to have the entrance facing a courtyard created by the adjacent parish hall to create the feeling of a monastic cloister. On the Feast of St. James July 25th, 1985 the parish celebrated its thirtieth anniversary by consecrating the new building.

The 90s
In December of 1991, Father Krutz announced that he accepted a new position as Executive Director of Louisiana Interchurch, an umbrella organization dedicated to bringing together the churches in Louisiana for the sake of unity and social outreach. The next year The Reverend John “Rocki” Proffitt III was called as the third Rector of St. James.

In 1993, St. James had its largest class of confirmations at 17 people, along with 2 receptions, 5 reaffirmations, and 1 baptism. St. James Day was celebrated again that year with a folk mass, picnic, and the James Gang Reunion: an invitation to all the former youth group members from over the years and across the country to come back together for this celebration.

During this time St. James established an Outreach Committee to head up the many charitable works the parish was involved in. And just as St. James had once began as a mission growing out of St. Paul’s so now St. James sent forth missionaries to establish an Episcopal Church in Many, Louisiana. Also established during this time was the ecumenical Lenten services in which St. James joined with other churches in Southern Hills for a weekly worship service and lunch during the season of Lent. As well as the founding of the St. Monnica Chapter of the Daughters of the King, an organization for women dedicated to the furthering of Christ’s kingdom through prayer, service, and evangelism.
​
The New Millennium
In the fall of 1999 Father Rocki moved to New Orleans to serve as Rector of St. Paul’s and the parish began a new Rector search. During that time the parish continued in worship with the help of a number of supply priests and efforts in outreach continued with support of Providence House, Family Violence Center, Northwest Louisiana Food Bank, the Gingerbread House, and many others.

In December of 2000, The Reverend Andrew Comeaux was instituted as Rector and served until 2002 when he was appointed a Canon at St. Mark’s Cathedral. There were a number of new events at St. James during the start of this new Millineum including a Dinner theater production titled “Murder under the Magnolias” as well as an annual “Pumpkin Glow” festival in October. In 2002 the parish’s old organ finally “gave up the ghost” and a new one was purchased in 2004 after fundraising was completed.

The Reverend Sue Bell, the first female priest at St. James, served as interim until the Reverend William Newby was called as the fifth Rector at the end of 2003. During Father Newby’s time a praise band was added to the music ministry of St. James and the Columbarium was built into the east side of the church’s nave.

From 2005 to 2010, the Reverend William Bryant served as Priest-in-Charge until his retirement. During his tenure St. James began to support the Canterbury House (an Episcopal college ministry) with meals and pastoral care. The parish also looked to improve its hospitality with the creation of a Greeters ministry with volunteers ready to welcome visitors on Sunday mornings. The carillon, a set of bells scheduled to play on the hour, were installed during this time as well.

Following Fr. After Bill's retirement, the Reverend Morgan MacIntire came to St. James first as Priest-in-Charge and then as St. James’ fifth Rector. At this time the parish began to expand ministries in outreach even more by starting the church vegetable garden which helps provide food to our neighbors including those served by Meals on Wheels and Filling the Gap. St. James also began a partnership with Pizza Hut to provide free meals for the athletes at local after school practices. In 2015 Mthr Morgan moved to Covington and began serving at Christ Episcopal Church.

In November of 2016 the Reverend Margaret Ayers was called from Mississippi to serve as the sixth Rector. She quickly got involved in many of the ministries at St. James including Solo Flight (a ministry for singles) and expanded home visits and pastoral care. The parish’s expansive efforts in outreach and other ministries also continued with multiple fundraisers, especially for the Fight Like Emilie Foundation which supports the fight against childhood cancer and is named in honor of the parish’s own Emilie Gibson. In 2018 Mthr Margaret moved on to serve at St. Matthias.


In July of 2019 the Reverend W. James Yazell, a recent graduate of the University of the South, was called to serve as Deacon-in-Charge until his ordination to the priesthood in October of 2019. He was then named the seventh Rector in March of 2021. During Father James’ tenure efforts in Christian education have been expanded, digital communications added, and the celebration of feast days emphasized. Of course, the arrival of the Coronavirus pandemic in 2020 has also made this a time in the parish of change and adaptability as the context changed on a monthly basis. Through it all St. James has remained flexible, committed to serving God and our neighbors, and looking forward to a future of growing together in the life of Christ.

A special thanks to Mattie Mosley for the historical research that informs this page.
Web Hosting by IPOWER
ST. JAMES EPISCOPAL CHURCH